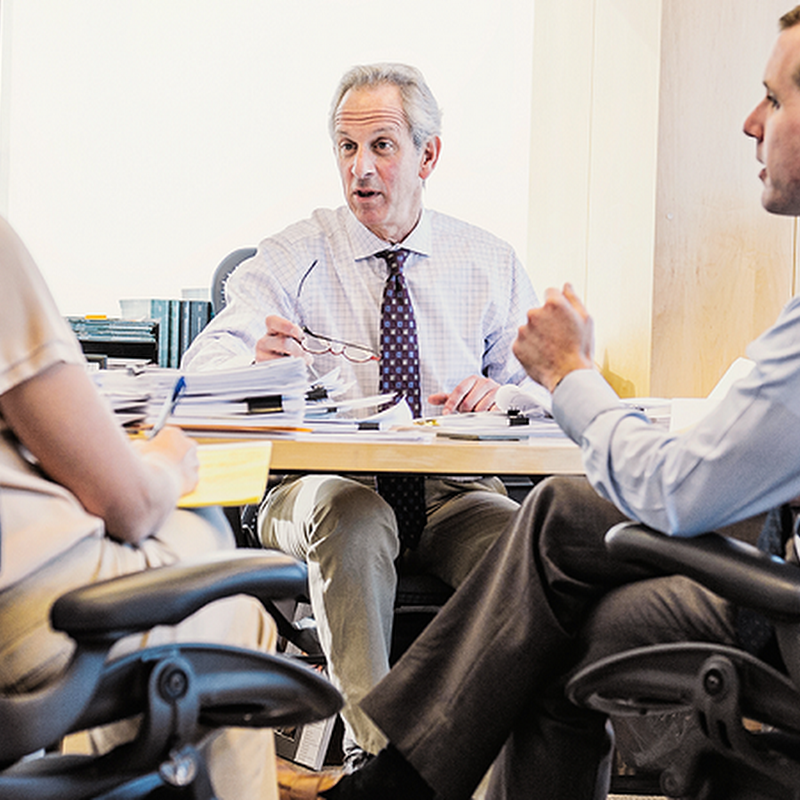 I had a very good experience with the Pritzker team. Negotiations carried out smoothly with a result beyond my expectations and a long trial avoided. I can only recommend this firm

Hands down the best firm to work with ! Ask for Lindsay , Jeanne ! With these 2 on your side you will not be disappointed. I am VERY pleased with the services they have provided to me !

From the beginning, Fred and Eric were both compassionate and professional; they and their team walked my family through the legal process and helped us reach a settlement for a family member's death. I would not hesitate to work with them again.
Hall Law PA :: Capitol City Criminal Defense :: Nelson Law Office: Gregg B. Nelson :: Ratgen Personal Injury Law :: Carey Law Firm, LLC

i highly recommend Pritzker Hageman. Eric Hageman and his awesome paralegal Jeanne, were so easy to work with! I live in the Seattle area, and was hit by a car in Pittsburgh while on a business trip, so communication was very important, and Eric and Jeanne did an excellent job keeping me up to date on my case. I ended up with a very good settlement, thanks to all their hard work.

Pritzker Hageman law firm reaffirmed my belief in the existence of good attorneys after a negative experience with another law firm.
David Szerlag and Wendy Thayer are an amazing team. They walked me through each step of the legal process, offering advice and the necessary information to allow me to make the best decision for myself and my family.
Every email and or phone call were always promptly and personally returned. They never lost their patience despite my frequent inquiries. I felt /feel that they were always motivated by what was best for me. They work hard to ensure their client/clients are fairly and rightfully compensated.
It is with zero hesitation to recommend and refer David Szerlag of Pritzker Hageman.

I've had 5 Star service dealing with this law firm that truly lets their clients know you are their #1 priority.
As a satisfied client, I recommend this law firm!

This law firm is lazy. So if you have a case that may take some effort do not contact this firm. Trying to save people from wasting an hour talking to them. The only reason for 2 stars and not one was because at least they admitted that they didn't want to do that much work. I'm guessing their firm is ambulance chasers that take on too many clients which leads to them denying any case that requires a slight effort.

Can't thank Ryan, Trish, Lindsay, and Jeanne enough. Everything went much better than expected. Communication was outstanding and they walked me through everything from start to finish with a more than reasonable settlement. This has to be hands down one of the best law firms in the country.

A coworker recommended Pritzker, Hageman after my husband suffered a life changing accident. Eric and his team took time to listen to our concerns and explored all possible options. As the bills mounted, Eric and his team guided us through.
Eric was knowledgeable, professional, respectful of our time, and in the end, we received a fair and swift settlement. I highly recommend Eric and Pritzker, Hageman law firm.

I was in an accident with a semi, and was referred to Pritzker Hageman by another attorney. They did an excellent job of explaining things throughout the legal process, and helped me obtain a good settlement.

Pritzker Hageman, PA and David J. Szerlag was my attorney representing me in my law suit. He and Wendy Thayer always kept me in the loop and well informed. If I needed to contact either one, they either answered my communication/call immediately or shortly after. I always felt I was part of the team. I DID NOT need to keep calling/emailing to get info re status on my case. I had to go to PA for a depo and since I had not traveled via airplane in many, many years, Attorney Ryan Osterholm traveled to and from PA with me to assist me thru the maze of airports. I was very happy with my settlement. Because of my experience with Pritzker Hageman, PA and Mr. Szerlag, Esq., I recommended this law firm and David Szerlag to a neighbor who had experienced a medical issue and she has thanked me a multitude of times.

Very pleased with the professionalism displayed by the whole team. Fred came to me and my family in Ohio and took care of everything. I can't thank Fred and his team enough.

My family has been represented, on two occasions, by the firm; in the first case by Fred Pritzker and, three years later, by Brendan Flaherty.

When she was nine, my daughter was mauled by a neighbor's dog and suffered massive facial injuries. Mr. Pritzker could not have been more generous - either emotionally or financially - and achieved the maximum settlement available through insurance coverage.

The second matter involved an auto accident wherein my son and I were stuck by a van while stopped on a freeway exit ramp. Through a rather convoluted process, Mr. Flaherty obtained fair compensation from the other motorist as well as the maximum benefit(s) available from our insurer.

In the intervening years, I have referred a few friends to the firm and also sought referrals to attorneys outside of their specialty. Neither I nor anyone that I am aware of has ever been disappointed in the least. Outside of employment law, Pritzker Hageman is the first call that I make when any legal issue arises.

I highly recommend Pritzker Hageman. They are the team you want on your side. Great experience!

Ryan and Roberta were rock stars for my food poisoning. I did not pose a straightforward case for them, but they worked hard and plowed through those challenges to ensure the maximum award possible for me. They are quick to respond, informative, and courteous. These things always take a lot of time and I feel the time frame ran about right and never felt neglected. I hope illness does not strike again for me or anyone, but I know without a doubt where to go if it does. Thank you!

Ryan is absolutely exceptional. He helped my family and I understand the legal process for my food borne illness case and welcomed questions at every step. Very timely responses, real interest in attaining a settlement, and genuinely wanted to get to know me as a person and not just a case. I would highly recommend Ryan for your legal needs.

My experience with Pritzker Hageman was extraordinary. I contracted a food borne illness and while 'googling' the illness, found an ad for their firm. I sent them an email and within minutes received a reply from Ryan. He was very helpful in explaining that I can sue the company that made me sick and we set up an appointment to meet. In our meeting, he clearly explained how my lawsuit would proceed and some possible outcomes. It took a year but he obtained a excellent settlement for me. I highly recommend Ryan and his law firm.

I had a great experience with the law firm of Pritzker Hageman. Everyone I dealt with within the firm was extremely helpful and attentive to my needs. I'm especially grateful to Brendan Flaherty. He handled my food-borne illness case from start to finish. I can honestly say he worked very hard and fought for me every step of the way. Thanks to his tenacity and hard work, I was able to receive a very fair settlement. He showed me the utmost of patience and respect when I asked him questions and always ensured I understood every aspect of the process thoroughly. I have so much respect and gratitude for Brendan and the team at Pritzker Hageman. I appreciate everything they did for me during an extremely stressful time in my life. I, most definitely, would recommend this firm.

Brendan was recommended to us by a friend who is a lawyer herself (but doesn't handle personal injury). Definitely glad we went with him to help us through my personal injury case after a motorcycle crash. Not only did he handle the case itself well, but he provided great assistance and "peace of mind" in dealing with the hospital administration, the various insurance companies involved, and the physical rehab place - if ever I had a question about which bill to pay vs. which to wait for insurance to deal with, or if ever I needed someone to explain to the hospital that something should be paid by my health insurance instead of my auto insurance, Brendan was right there on top of it.

Great experience with Pritzker, Hageman law firm. They took my fathers wrongful death case and walked my family through the case step by step. Lindsay was our lawyer and she made the case very easy for us to understand and she was very caring and sympathetic about my fathers death and was always there for us. They worked very hard for us and got my family a great settlement for my fathers case and I would definitely recommend to use this law firm.

Leave A Review For For Pritzker Hageman, P.A.